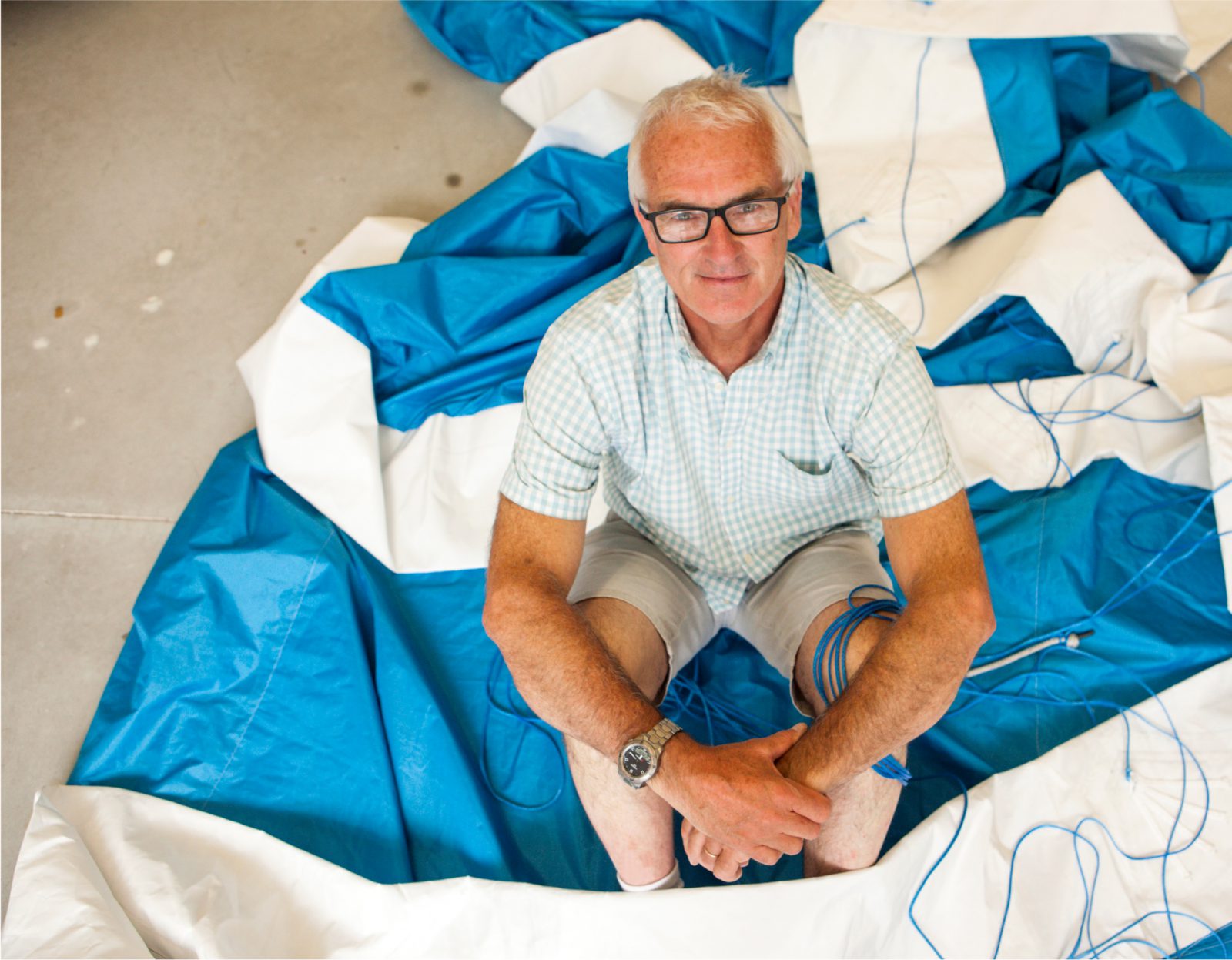 Originally from the Paris region, Yves Parlier first travels at sea through the various volumes of the Damien saga that his father gave him and which tell the story of an incredible odyssey: that of a 10-meter boat, the Damien, skippered by two friends who left La Rochelle in 1969 and sailed the world for five years. Yves Parlier was 12 years old at the time of this reading. For the future sailor, it was a founding book.

The birth of a passion

Yves Parlier is passionate about the sea and boats, but also about the art of navigation and weather forecasting, whichinterests him so much that he takes the competitive examination to join « Météo France » a few years later. This advancedknowledge of meteorology will help him later during his offshore races, but also to understand ecosystems and naturalphenomena. Every summer, Yves Parlier went to the Bay of Arcachon. It was there, as well as on the lakes of the Paris region in which he immersed his first skiffs, that Yves Parlier fell madly in love with boats and sailing. It was thendecided! He would lead a sailor’s life.

At the age of 15, he became a skipper, commanded the boat and was responsible for the crew and the ship with the French Youth Sailing Association. He had several experiences as skipper of the EDHEC cruising race. After his first races, hedecides to direct his studies towards the knowledge of the materials known as composites because they are made of at least two materials of different nature which, once combined, make it possible to obtain a new material more powerful. Yves Parlier took advantage of the fact that Bordeaux was the world capital of composites and of the local specializedcompanies to perfect his expertise. The young man studied at the University of Bordeaux and obtained a DEST (diplomaof higher technical studies) in composite materials. Once he had his diploma and a solid knowledge of materials, hedecided to build his first boat.

At the age of 20, Yves Parlier discovered racing and won the most famous one 4 years later: the transatlantic race. He wasonly 24 years old, and the sailor was winning every time. He became one of the most popular French skippers. 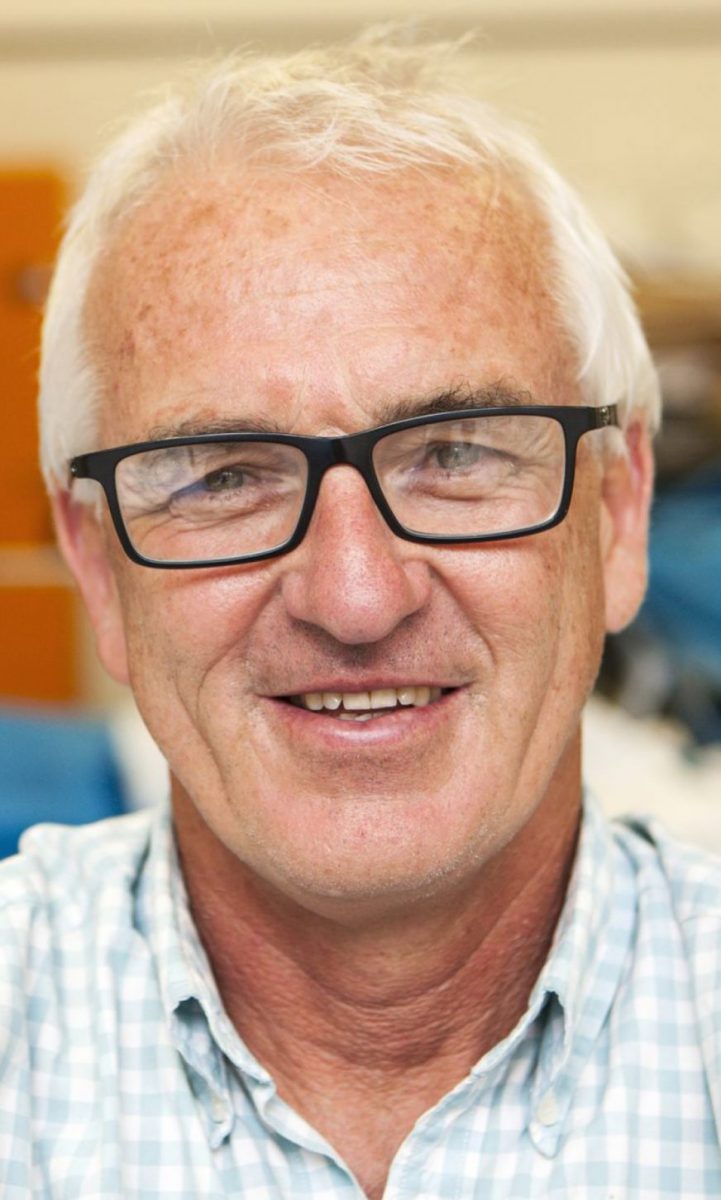 The engineer and the adventurer

In addition to sails and wind, Yves Parlier is passionate about extreme sports and paragliding. In 1998, he fell 200 meters whiletrying out a new sail. The trauma was serious: fracture of the tibia, fibula and hip. His sciatic nerve was also affected. After thisfall, which could have cost him his life, Yves Parlier, faithful to his convictions, resurfaced and decided not to abandon hismaritime projects. On November 5, 2000, he was back on the starting line to race his third Vendée Globe.

Yves Parlier is a great ocean racing skipper, but he is also known as the “engineer of the seas”.

Since he was very young, Yves Parlier has been studying the secrets of shipbuilding. After obtaining his DEST in composite materials, he decided to put his skills to good use in his favorite field: sailing. In 1985, he participated in his first race on his first boat, a 6.50 meter mini transatlantic. The latter crowned his training as an engineer in composite materials with a life-size test. It was the first racing boat equipped with a carbon mast and became a forerunner in the field of engineering and navigation. By setting a new record to reach Brest from Pointe à Pitre in 31 days, 20 hours, 37 minutes, Yves Parlier made his mark and began a singular career at the age of 24.

His taste for innovation and engineering and his futuristic vision allowed him to be at the origin of many world premiere such as the invention of the wing mast and the carbon fiber mast, which have become essential for racing today.

Yves Parlier has developed several boats including a 60-feet monohull with Aquitaine Innovations as sponsor. For this boat, heworked with Jean-Marie Finot, a famous naval architect, with whom he started from scratch to innovate. This boat was extremelyefficient and innovative, and won many races.

feet catamaran hydroplane, which won the record for the longest distance sailed in 24 hours in a monohull, single-handed and with a crew. This prototype made of composite materials once again incorporates many world firsts, notably a carbon mast and a Kevlar shroud. A few years later, the hydroplane will become the SeaKite, the first zero-emission vessel towed by kite and demonstrator of new marketable technologies, including his SeaKite system, an automated kite to decarbonize maritime transport, developed by his company Beyond the Sea and his consortium.

Eager to act for the planet and to use the wind in his achievements, the innovator and engineer Yves Parlier is now applying kite traction on his innovations named LibertyKite and SeaKite within his company Beyond the Sea.

Yves Parlier repaired his dismasted catamaran in the middle of the ocean and became a legend.

On November 5, 2000, two years after his paragliding accident, Yves Parlier stood at the starting line in Les Sables d’Olonne to tryto fulfill his sailor’s dream of winning the race he had dreamed of so many times, the Everest of the Seas: The Vendée Globe.

The race started off well for the navigator, he sailed down the Atlantic Ocean towards the South and was in the lead for severaldays. During the third week of the race, off the Kerguelen Islands, he was sailing in a strong gale which allowed him to go veryfast.

After a few miles, his boat showed signs of weakness. Still propelled by a very strong wind and on a stormy sea, the boat suddenly crashed into a big wave. Under the violence of the shock, the boat Aquitaine Innovations that he built dismasted off the Kerguelen Islands, in the middle of the Indian Ocean. The mast was broken into three pieces. It was out of the question for Yves Parlier to give up! Yves Parlier headed for the bay of Stewart Island to repair the mast of his boat.

He imagined many solutions and finally adopted a solution that consisted of making a carbon sleeve that would be connectedbetween the remaining mast and the masthead of the boat. To achieve this, the sailor had to succeed in making an oven on his boat with the material he had and without the help of anyone, otherwise he would be disqualified from the race. Yves Parlier gatheredhis gas stove, 5 bulbs, his survival blanket and his sleeping bag. He did a colossal and extremely tiring job but succeeded in hismission. Ten days after arriving on Stewart Island, the competitor was able to leave with a mast of 18 meters instead of 27 at the start. He was so tired that it took him two days to install the mainsail on his boat and he fell asleep in it.

His boat was sailing well. Yves Parlier estimates his remaining time at sea at 60 days. His food supply is almost empty. He wasstarving and had lost a lot of weight. To regain his strength, he decided to fish for seaweed and eat it. He quickly becamedisgusted. His morale is at its lowest for two days, and he does not follow at all the rhythm imposed to manage his daily foodration. In two days, due to communication problems with the land, Yves Parlier devoured a fortnight’s supply of chocolate and cheese and all the food outside the daily ration. On the verge of abandonment, he regained some hope by managing to repair hissatellite phone and to call a friend who reassured him, reasoned with him and advised him to concentrate on fishing. He caughtmany fish and this allowed him to reach the port of Les Sables d’Olonnes. On March 16, 2001, after 126 days, 23 hours and 16 minutes of racing, Yves Parlier finally crossed the finish line, 13th in the general ranking, but a winner in his own right and in the hearts of the French.

On July 14, 2002, his courage was honored with the medal of Chevalier de la Légion d’Honneur. Reflecting on his experiencesduring the Vendée Globe, Yves Parlier developed the LibertyKite, a self-standing kite dedicated to the safety of sailors, a few years later.

Going off the beaten track to go further

Yves Parlier is nicknamed the extraterrestrial by his companions.

From his first solo race, the Mini Transat, Yves Parlier’s knowledge of climatology and the different maritime routes earned him victory. But it was in 1991 that the navigator received his nickname of extraterrestrial for his science of meteorology during the Solitaire du Figaro. During the third leg, he was leading the race and he headed for a high-pressure bubble. He then decided to go around this bubble and let the other competitors head into the calm.

This decision allowed Yves Parlier to arrive the next day 7 hours ahead of the other skippers. Lionel Péan, former skipper, bluffed by Yves’ performance, declared “He has the finger of an extraterrestrial”. He didn’t understand how he managed to identify this trap. Michel Desjoyeaux, former sailor and second in this Solitaire du Figaro decreed, in the men’scategory, I am the first, Yves Parlier is an extraterrestrial.” Alain Gautier, for his part, wrote on his tee shirt at the finish of a race where Yves had beaten him “E.T: go back home”, in reference to his nickname of extraterrestrial.

His technical curiosity is matched by a steely morale which, despite the hard knocks, and sometimes discouragement, allows him to overcome the challenges of today and prepare for those of tomorrow by tirelessly pursuing his research to invent new solutions for the survival of sailors, hydro and aerodynamic innovation, as illustrated by the creation of LibertyKite, the SeaKite boat or the SeaKite system.

Yves Parlier is a visionary skipper who has participated in the evolution of high level sailing. Thanks to his engineering degree and his constant desire to innovate, he has developed effective solutions in various fields. All of his successes and achievements, both in the field of ocean racing and in the development of innovations, have allowed him to gain a veryimportant notoriety and trust and to prove the relevance of his choices and his innovative spirit. In 2014, after years of competition, Yves Parlier turned to new adventures: kite propulsion.

“I’ve always looked for ways to make the best use of wind on boats, yesterday to win races, today to save our fossil fuels.” – Yves Parlier

A career in the service of the future

After 30 years of being interested in speed, competition and the optimization of ocean racing boats, Yves Parlier decided to stop his career with the desire to find solutions to decarbonize the propulsion of all boats and to achieve cleaner sailing.

This desire to act for the environment is a project that he finds indispensable today, where fossil fuels are still predominant and where the economic dynamic is still favorable to their use. According to Yves Parlier, it is necessary to think about technologies based on renewable energies. It is essential for civilization to free itself from fossil fuels as quickly as possible. It is a question of survival for the planet, or more precisely for our civilization.

After thinking with his teams about the best way to allow boats to use the wind, Yves Parlier came to the conclusion that the kite is the most important means of wind power. Indeed, it is the lightest system that can pull large boats. A 4 kilogram kite can pull a 10 ton boat without any problem. A 400 kilograms kite is able to pull a 300 meters long boat. This technology is adaptable to all modes of navigation, and all types of boats, and in the simplest and most environmentally efficient way possible.

Beyond the Sea was born in 2014 in order to find solutions that allow boats to use a free and naturalenergy: the wind.